THE BIBLE TOLD US SO

Contemporary justice…sees as its primary focus the maintenance of order. Because of this, and because it can separate questions of criminal justice from social justice, the order which it tends to maintain is the present order, the status quo. All to often, therefore, modern law is a conservative force. Biblical justice, on the other hand, is an active, progressive force seeking to transform the present order toward one which is more just. In doing so it looks out especially for the poor and the weak. Contemporary justice puts the state and its coercive power at the center, as source, guardian and enforcer of the law. Biblical justice puts people and relationships at the center, subject to both law and government and God. Biblical justice provided an alternative paradigm that critically challenges our own state-centered retributive approach. 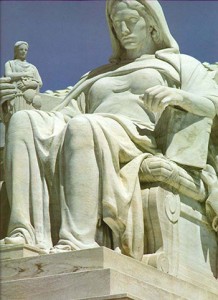